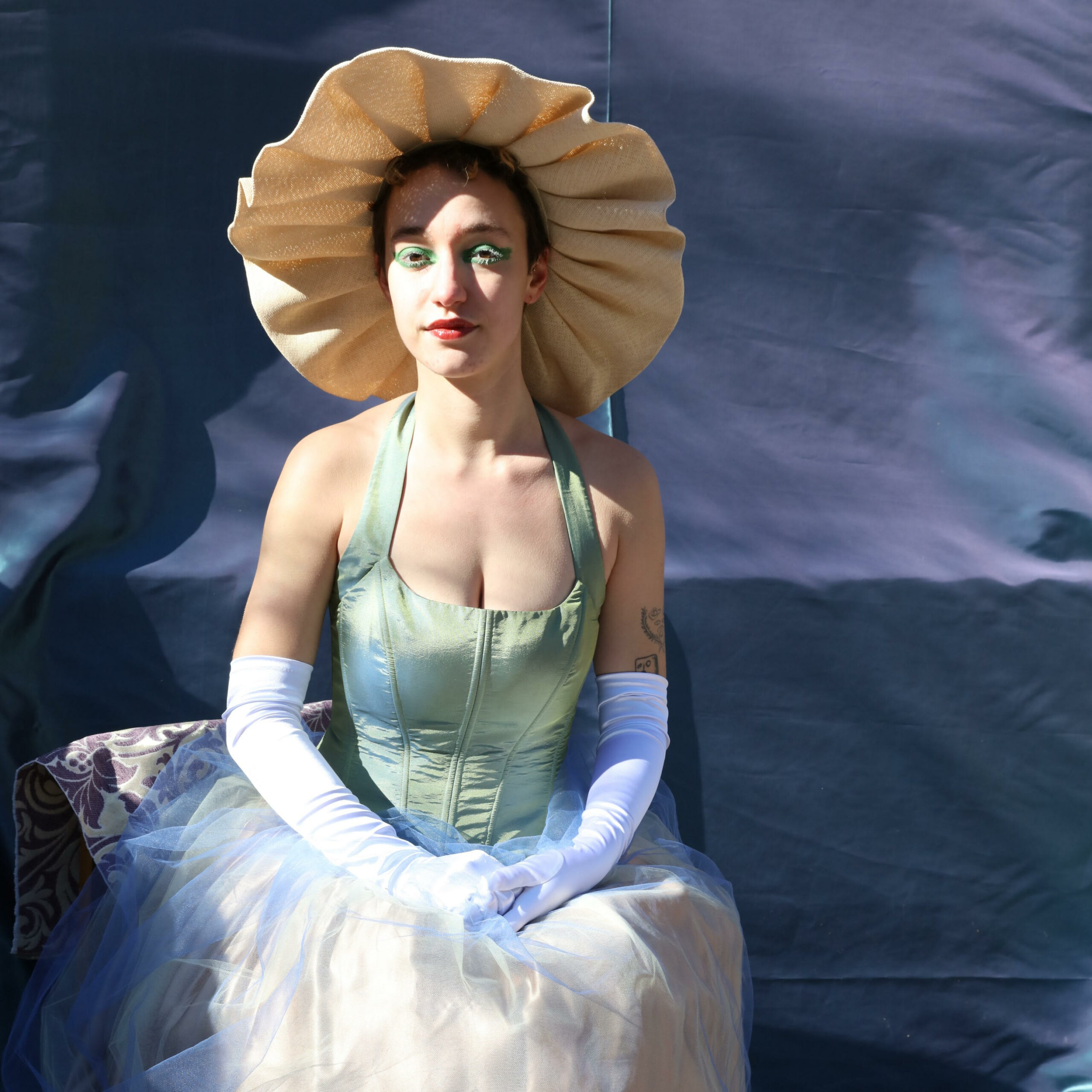 When I first listened to Vera Kahn’s music, I felt called to a land of grey areas. I imagine fusion restaurants serving cold udon noodles in alfredo sauce or bites of vinegared raw fished mixed in dollops of guacamole. Whatever the combination, there’s always a confident and familiar constant.

Kahn’s dad loved early rock n’ roll and showed her the sounds of Willie Nelson and Johnny Cash. John Prine had a huge influence on her songwriting with his storytelling and political songs. Later, she attended LaGuardia High School in New York City for voice and sung with the Young People’s Chorus for 10 years. The group specialized in contemporary classical and had top-notch composers like John Corigliano, Meredith Monk, Terry Riley write pieces for them.

Over 4-5 years in college and post-college, Kahn wrote Charmed, I’m Sure while simultaneously working sound for the concert committee at Grinnell. A chunk of songs for the album was for her old punk band Alien Girls. However, her solo work isn’t quite like her other work. There’s a highlight in a grey area motif; it’s fermented in a dizzying space between heartbreak and hurt, of country and city. “I’ve always been drawn to country music because the form is so conventional and there’s a blueprint.” Kahn wanted more of a singer-songwriter vibe. So she brought the volume down and “country-fied” the loud, punk sound. “It’s not country music, it’s city music,” she told me, laughing.

Her music unwrinkles like embroidery of city life clasped between influences of growing up with a country soundtrack. Many themes in the album center around New York City (where she calls home). Married with twangy overtones, verdant melodies, moving basslines, and charismatic narrative authenticity, she creates a cauldron of sounds and words that mesh together what she knows best. For instance, In “God Bless the a train,” Kahn sings about the versatility of the ride; how you can take it Rockaway Beach and JFK and Washington Square Park to smoke weed.

Other tracks like “Oh My Darling” is about feeling something for somebody but not wanting to hurt them. And “Hands” is about knowing someone is a player and hearing what they’re saying, and also knowing they don’t mean it but still going along with it. “There’s less heartbreak and less a feeling of knowing that something isn’t right or good for you. It’s really not love when you can’t stop seeing them even when you don’t like them. It’s like you know they’re hurting you, or you don’t love them anymore,” she said. “I have a lot of songs like that.”

A big fan of music theory, Kahn likes systems and finds them freeing in the sense that if you follow rules, it creates a finite grid to put your creativity in. It’s spartan, and not particularly open-ended. “If you can do anything, then I won’t do anything,” Kahn said. “But if I have a box to put anything in, I can put something in there. It helps me understand chord progressions. If I was stuck, I can just switch a chord in.”

Kahn’s music video for “Howdy (How I Feel About You)” was directed by a good friend, Andy Rose Fidoten, a filmmaker and composer based in New York City. Together, Kahn and their friends developed their vision in Prospect Park during the midst of lockdown. In the video, a green-skinned protagonist dons a blazer and looks out to find someone like her. But all she sees are dancers on a baseball field looking a little too human. By the end, two green creatures meet, dancing awkwardly into their version of an archetypical sunset; set under a foggy day in on a baseball field dipped in a cold winter of negligence. “You think you’re weird and unlovable and then you find someone who’s also weird, and you’re lovable together,” she ended.

Before wrapping up, we chatted briefly about the validation of nourishing a personal project and stepping away from being a collaborator. While both harbors fulfilling qualities, there’s a certain confidence that pierces through when you find a way to write about your roots.

Kahn’s current plans are working in restaurants in the summer and then enrolling in coding school in the Fall.