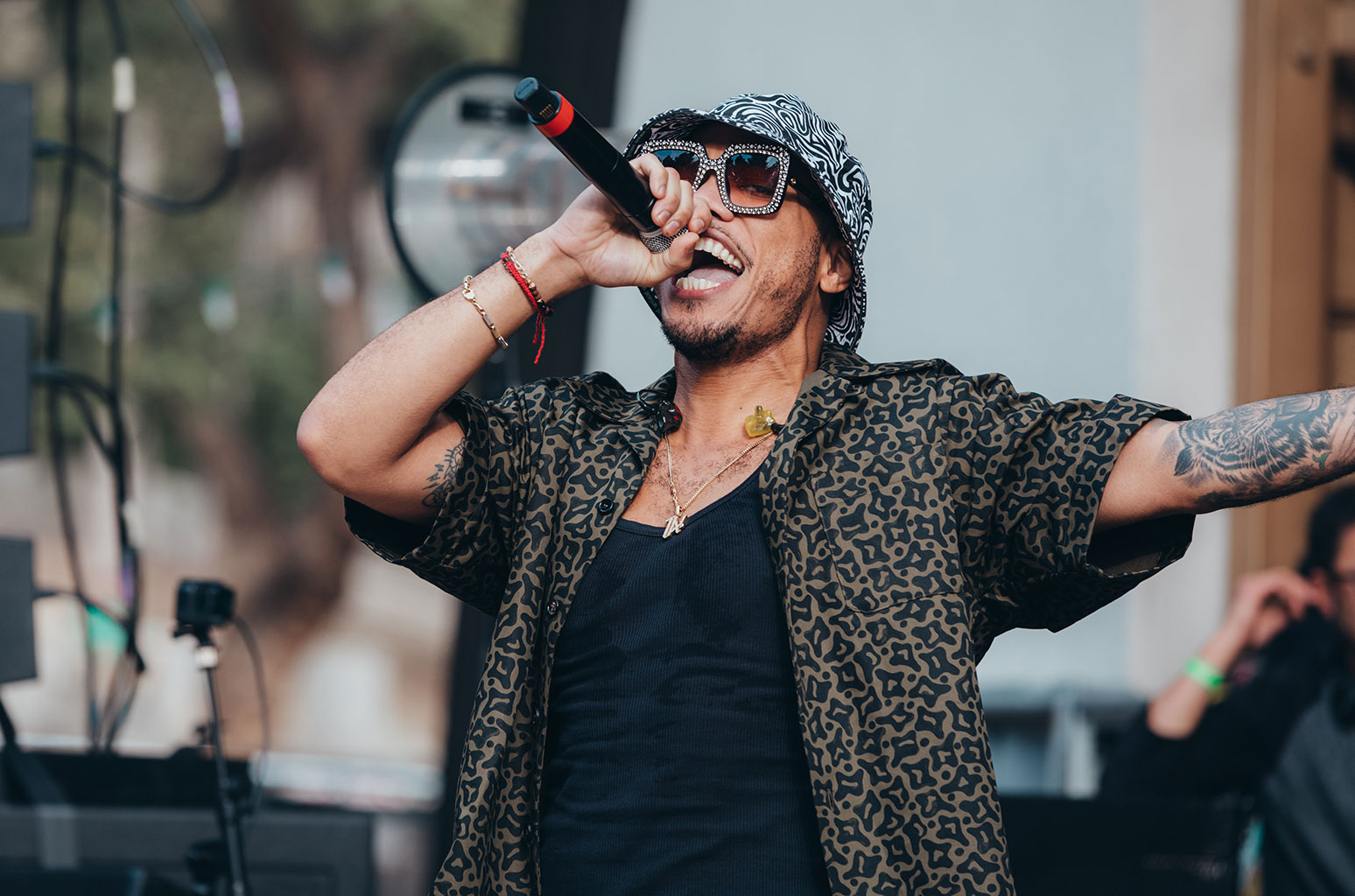 Anderson .Paak Opens Up About His Community Efforts & Remembers Juice WRLD: 'He Just Had a Great Future'

Anderson .Paak continues to give back to the streets that raised him. Before throwing his third annual .Paak House celebration — an afternoon-long music festival with donation-based entry where the rapper/singer/musician’s friends performed for free — at Los Angeles’ MacArthur Park on Saturday (Dec. 14), the Grammy Award winner and L.A. rep rallied to keep the doors of the Performing Arts Center in his native Oxnard open earlier this week.

Heading towards closure due to city budget cuts, the Hobson Way facility will now be open through next April, .Paak told Billboard with glee before the .Paak House party. Recalling his days as a youngin’ breakdancing all over Oxnard, .Paak looks to turn the center into the official .Paak House, where opportunities in the arts and spaces for self-expression will be made available to members of inner-city communities.

Beyond his charitable efforts, .Paak also took some time to reflect on the loss of Chicago rapper Juice WRLD, who died after suffering a seizure on Dec. 8. The tragic news comes a year after .Paak performed a pop-punk rock cover of Juice WRLD’s breakout hit “Lucid Dreams” on his .Paak House Radio special.

In a conversation with Billboard, .Paak discussed lending his voice to a forthcoming installment of the Dreamworks franchise Trolls as the rock star character Prince D (cue the .Paak catchphrase, “Yesss, lawd!”), and the possibility of taking his talents to the big screen as an actor. Read the interview in full below.

You’ve continuously given back to the community. Talk about the impact of the .Paak House event over the past three years of hosting it.

I mean, there's no greater feeling. Every year, it gets hectic and bigger, but we do this for the kids, man. Like you see the faces and the reactions that people give. Some of these kids never experienced the live show or even anything close to a festival setting. Being able to share a world-class show and give some attention to people that are overlooked is an amazing feeling. It's my favorite time of the year.

Did inspiration for this event come from you growing up as a kid in Oxnard, seeking opportunities in the arts similar to this?

When I was really young, I was exposed to music and drums. My mom was into a lot of soul music. I don't know what I'd be doing if I wasn't exposed to instruments or music. I probably would've put my energy towards other things. A lot of kids don't get the opportunity, so that's a big part of why we do this. Or just getting in front of them and letting them see people playing [for] them, people that care for them and helping them out.

This year’s lineup is very eclectic. You’re throwing in some comedy folks. How did you curate the talent this year?

I'll just go through my phone, man. Like, "Who the homie? Who owe me a favor?" Honestly, I did a lot of collaborations this year with a lot of amazing talented people and I think that's how a lot of them worked out, too. I was like, I worked with him and all the people that are my friends and that I'm inspired by, I feel like could put on a good show. [Those] that I've been wanting to play with live, too, I try to get them to come out and everybody just comes out with their own time. Nobody's getting paid, [they're] just putting the time and effort.

Have you heard a story yet where there was a kid or a .Paak House attendee who took that inspiration and created something out of it?

All the time. I was just at one of the Japanese restaurants having a sushi and the waiter said he came every year and he's a musician and makes beats and was super inspired by it, and every year he looks forward to it. I meet families all the time who say this is like their Coachella, they pay to come here every year and they're so grateful to be able to have help for the kids.

You've also been busy trying to keep this performing arts center up and running in Oxnard. Why was it especially important for you to put your name and effort behind that?

To have an institution like that that's exposing people to the arts is huge. That's where we’re hoping to have the [Brandon Anderson Foundation] in the future and the kids. And when I went over there to visit, I saw so much talent, so much potential in that place. I just wanted them to have a chance and I think that people just didn't know about it. People didn't know that it was about to close and that [the city was] trying to close it down. We wanted to [bring] some awareness to it. We got the time mixed and they're keeping the doors open until April. Then we’re going to have another meeting and keep it going from there.

What are your personal experiences with the center?

We used to go there all the time. I grew up playing drums in church, so we used to go play church events, beauty pageants. There used to be high school dances that they used to throw and those used to be really fun to do.

Do you have a goal for how much money you want to raise for this?

We want to keep the doors open first. Eventually, I would love to have that be the headquarters for my actual .Paak House. So we're working on that and I think they need close to a million to build, renovate and keep it going. So yeah, we're looking to see what the exact number in hopes to raise it.

Speaking of touching the community, there was someone that we lost recently who was a very profound voice in the music business with Juice WRLD. How did that loss affect you and what do you think he means to this community?

Man, I was just sick to my stomach to hear that. I hate hearing when the youth pass too soon, and the kid was only 21 years old. Every time I met him, it was really cool. I met him one time in Australia and just saw him recently at one of the festivals that we did. He just had a great future, was a great talent, could freestyle his a– off. We loved his music and he will be missed. It really hurt man. He was someone I knew. A lot of my younger family and a lot of my younger friends really enjoyed his work too. So, you know, rest easy. We’re praying for his family too.

What's your advice to some of the younger artists who are still trying to navigate this industry and lead a balanced life?

There's so many ways to do this thing and I can only say that patience is a virtue. Take your time in this thing. Treat everybody like you want to be treated. I would just say take your time in this industry. It’s like what the homie Nipsey [Hussle] said, it definitely is a marathon. There’s so many people you're going to meet, so many different things you want to do, but being able to put the energy into the music, at the end of the day, that's going to be where it's at and you know, not seeking out drugs or other things to fill that void. Having someone to talk to. If you ain't got nobody, hopefully you still got your mom or your pops or family members. If you ain't got that, put it in the music. Take that time man, because these kids got so much talent and potential and it's just a shame that they don't get to even get to the point where they can have hindsight. So just taking your time, really taking these moments in. Like these guys are on top of the world at such a young age. So being able to have fun and being able to really cherish these moments, that’s what it's about.

In terms of building on your own musical legacy, what's next for you? What are some passion projects currently keeping you busy?

The Free Nationals just dropped their album. We've been working on that for a few years now, so I'm glad that's finally out and getting them on the road. Got some movie stuff I'm working on. I'm in the new Trolls movie. It was amazing. So much fun.

How is voiceover work different from laying down vocals for a song?

It was kind of similar. Like you just get comfortable and the more takes you do, it gets a lot of fun and I love it 'cause I really wanted to get into the acting thing, but because there are no cameras, you can really get silly and you want to try different things. [I play a character named] Prince D and he's the Prince of Funk.

You better get that DreamWorks check. How about actual acting?

I would love to get into it. As soon as Anthony [Anderson, who is sitting a few feet away during the time of this interview] give me a script, he gon’ put me on Black-ish, then we’ll be on our way.