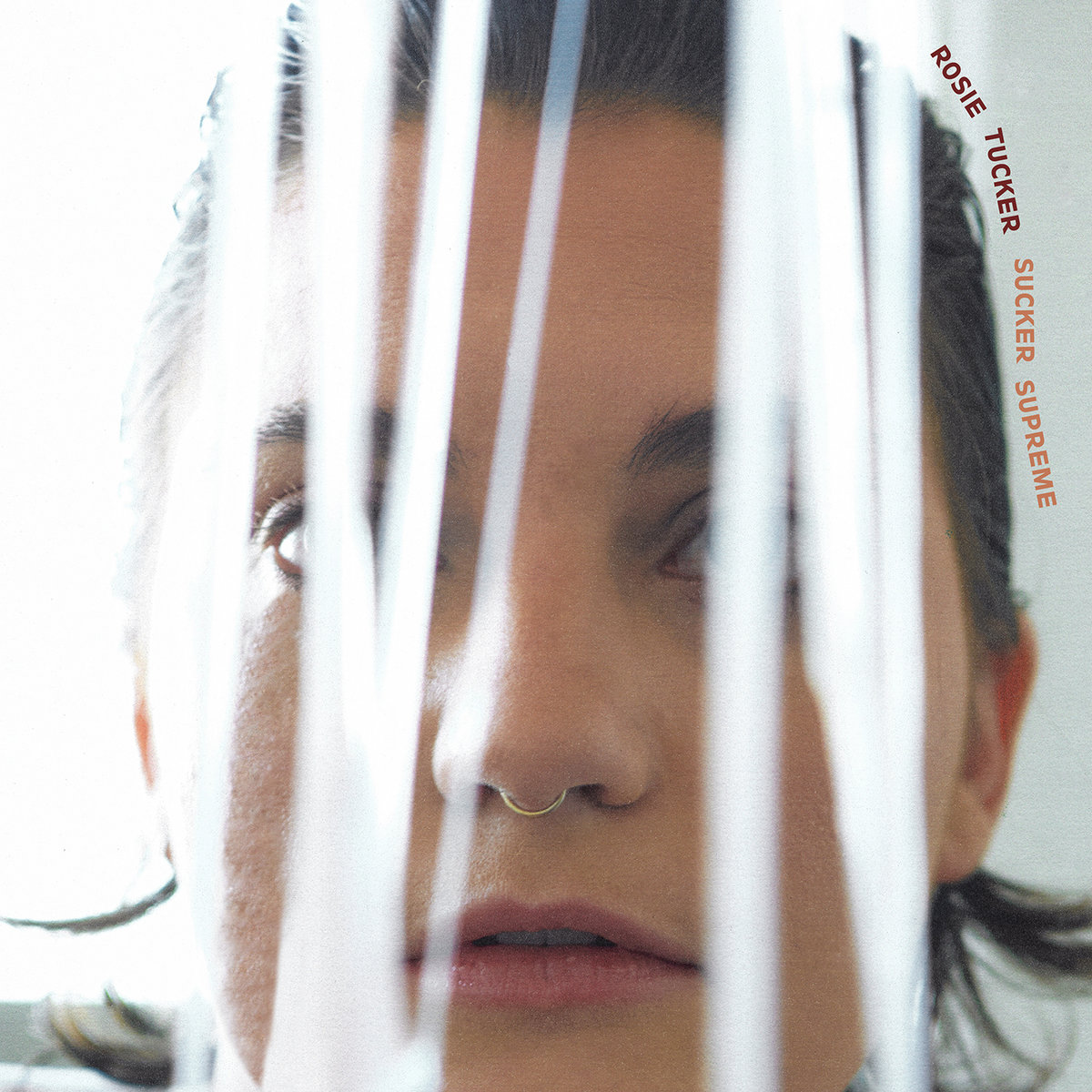 No one makes music quite like Rosie Tucker. The Los Angeles native has been on the rise for some time, but particularly as of late. Tucker’s sophomore record, excellent Never Not Never Not Never Not attracted leagues of new fans with its combination of warmth and wit. Tucker’s lyrics are whimsical, affecting, and exact — often all at the same time. There’s a reason it won the title of Album of The Year from this very publication. Their new record, Sucker Supreme, is the perfect follow-up to a record of such a specific nature. It carries the same charisma and personality that made people embrace their music but gives Tucker the space to grow and to experiment with their arrangements and formulae. Songs like “Creature of Slime” or “Clinic Poem” would have stood out on Never Not, but here, they slot in perfectly.

The record opens with one of its finest moments, and the most immediately palatable of its changes of pace – the distorted “Barbara Ann.” A song about Tucker’s grandmother and spending time inside the American monoculture of the Midwest, lines about billboards, procreation, and Jesus form the verses, while a Beach Boys interpolation forms the chorus. Tucker has made plenty of powerful rock songs, but “Barbara Ann” is the first time their guitar tone has had the chance to rock this hard. It requires no time to grow on the listener, it’s built to be stuck in their head at first listen.

The same cannot be said of “Habanero.” It’s not a song that’s trying to overpower you with its instrumentation. Its emotional resonance, maybe, but not its guitar work. “Habanero” led the album’s rollout as the lead single, and it’s easy to see why. The song sounds similar to many of the songs on Never Not, but with the elevation that more funding can offer a musician. It’s gorgeous, telling a story in bits and pieces of the pain that comes with trying to force things to work out as we’d like them to. I’ve mentioned how much I love Tucker’s lyricism, how evocative it can be. The song’s opening line “such a hot habanero, you can feel it in your jaw” is a stellar example of what I mean. It’s the most effective way to phrase that and point to a specific feeling. It might not make you actually experience that burn, but it comes damn close.

Though these songs are both excellent, they only push Tucker’s sound so far. The record’s back half is where things devolve in the best way they can. “Clinic Poem” is a Lo-Fi gem, composed of all verses and sprinkled with tape fuzz. The languid “Peach Pit” is a dreary piece of dream-pop full of swirling synths and guitar that lies in the mix with the fluidity and structure of silk. The record contains Tucker’s cover of Jeffrey Lewis’s “Arrow.” Lewis might be the ideal artist for Tucker to interpret, as both write songs that end up straddling the line between stream of consciousness and artfully obscure. “The Last Time I Did Acid I Went Insane” could easily be a Rosie Tucker song or one they could make their own. I for one would love to hear it.

I’m fascinated by the concept of sentences that have never been formed before. Certainly, we all have done it, but there’s no way to check, so it doesn’t register as remarkable when it happens. On “For Sale: Ford Pinto,” it feels near-certain that “Wolfing down Doritos / Lickin’ on my fingers / Anger on my tongue / Doritos in my anger” is one such uniquely formed phrase. The track is Sucker Supreme’s secret weapon. A song that wastes no time proving its greatness with the attention-grabbing opening line “Wolfy’s watching car wrecks on the internet.” The song bobs and weaves, and as it goes on, the delightful pop melody and straightforward structure halts, and then overheats. As it falls into chaos, it becomes the indie rock parallel of Kero Kero Bonito’s “Only Acting.” It’s a song that could only belong to Tucker and their team of collaborators. As Sucker Supreme comes to a close, we’re asked “How was it?” Aside from that question and strange, scattered sounds, the record’s outro is quite sparse. It’s an easily answered question, though. How was it? Exhilarating.