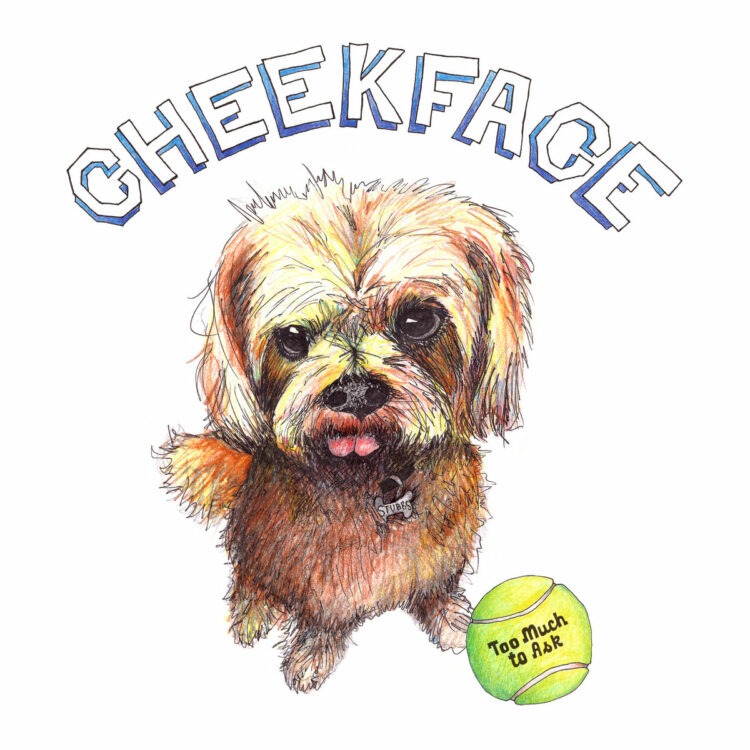 Album Review: Cheekface – ‘Too Much to Ask’ 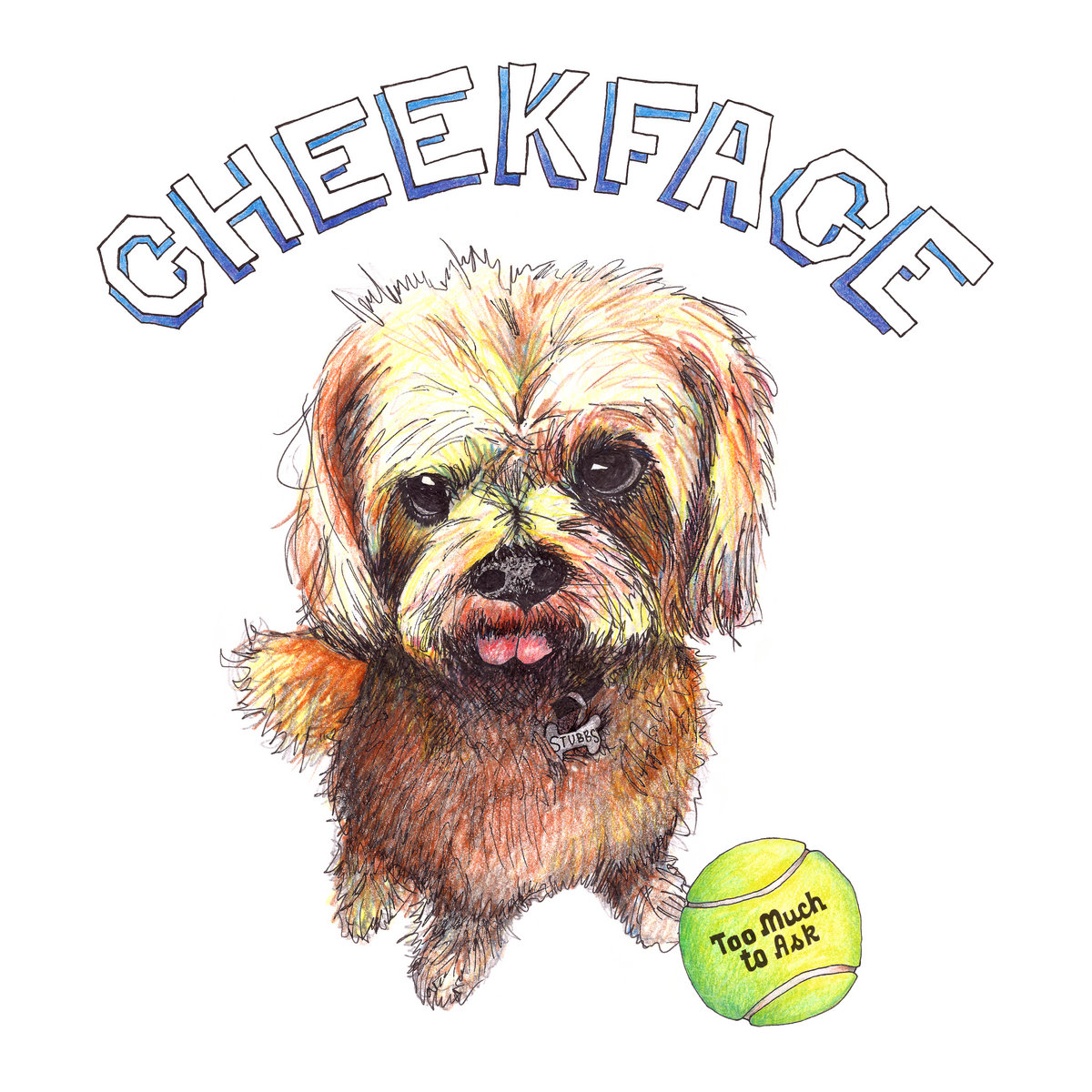 Cheekface created an endearing and fun sound over their first two records that remained unique even as the band embraced the melodies and chord progressions that pop up in American music throughout the decades with more than a wink and a nod. While everything the group’s fans (Cheekfreaks) love—witty lyrics delivered in a talk-sing way, choruses that are impossible not to sing along to, and razor sharp instrumentals with the bass taking more of a lead role than the guitar on a lot of songs—is present on Too Much to Ask, Cheekface is also pushing their sound a bit more here. Opener “When Life Hands You Problems” has a noticeably rawer feel, working as an in-your-face garage rock tune with Greg Katz letting loose on both the vocals and guitar. That rawness also shows up on the jagged, rough “I Feel So Weird!,” a tune with a trippy vibe built off the synth line and backup vocals in the chorus. It’s maybe most felt in “Noodles,” a one-minute song that grows from the repetition of “a big cup of noodles / a giant cup of noodles,” starting with classic Cheekface vocals that are soon doubled with Katz screaming the lines overtop of the lower register in a raw and impassioned way that really highlights the contradiction of Cheekface’s largely happy, fun music that often features lyrics about the apocalyptic state of modern life. It’s as if the group couldn’t go on playing this music anymore without adding some visceral screaming into the mix.

This is not to say that Too Much to Ask is the unraveling of Cheekface the band, as the record is packed with tunes that fit comfortably within their catalog. With the sardonic chorus of “I caught a cold / I coughed on all my friends / now everyone is coughing on everybody else / and we’re coughing on our doctors and our doctors cough out: Everything is fine! / Everything is fine! / Everything is fine!” and a verse driven by the combination Amanda Tannen’s bassline and Mark Echo Edwards on drums and shaker percussion (which is all over the record, adding a bit of energy whenever it pops up), “We Need a Bigger Dumpster” is kind of a quintessential Cheekface song. If you’re unfamiliar with the band, pretty much everything you need to know is in that song. It makes a nice pair on the record with “Pledge Drive,” a tune that is a little funkier in the verse, as Katz delivers lines like “life’s little moments in an extra large box / courting controversy in an esoteric field / why don’t the police ever obey the law?” and “this mob of teens with sponges is ready to wash your car / I’m standing in the Wendy’s drive-thru screaming FUCK ALL THE TRANSPHOBES.”

The group dropped the record as somewhat of a surprise this week after rolling out a few singles over the course of the year, one of which being “Featured Singer,” a track about wanting to be the featured singer on an EDM song that has an appropriately catchy dance beat and astral, metallic, wordless chorus. As is often the case with Cheekface, the lyrics (co-written by the band members) take center stage with jokey lines like “Spin Magazine, The Needle Drop and Reader’s Digest won’t even review it / but kids will choreograph elaborate dances to my voice on TikTok” and “no problem you can Venmo me back later for the ketamine / Diane, did you know this stuff was made for horses?” The group is clearly having fun on this one, and Katz’s delivery of “come on! Let me feel your energy” as the music cuts is one of the record’s more hilarious moments.

The second half of Too Much to Ask is an impressive run that shows off the bit of range Cheekface added to the record. Featuring Sidney Gish on vocals, “Election Day” is a light, summery diversion with characteristically Cheekface lines like “your dad was a congressman / my dad was a dumpster-diving freegan / Dr. Bronner was not a real doctor / the name was mostly aspirational.” It’s followed by the surf rocker “You Always Want to Bomb the Middle East,” ironically the most upbeat song on the record. The bouncy background vocals make the intro the perfect soundtrack to one of those scenes from the classic Scooby Doo cartoons where a villain chases them back-and-forth in hallway with a bunch of random doors, while the chorus laments “you always want to bomb the Middle East on the weekend / when we could be cutting grass or eating cheese with your girlfriend / we could learn to read and write in Portuguese or Korean / but you always want to bomb the Middle East.”

“Friends” takes a slacker, looser pace and fits nicely between “You Always Want to Bomb the Middle East” and “Next to Me (Yo Guy Version),” another single and maybe one of Cheekface’s best songs (it certainly has their most wild guitar solo yet). When I saw the group live last fall , they cut into Emphatically No.’s “Don’t Get Hit by a Car” to point out that it was “one in a long tradition of songs that have the exact same chord change.” (editor’s note: someone filmed this and put it on youtube. Thank you, royalninja.) Katz went on to split the audience into two groups singing “Sweet Jane” and “Jack and Diane,” adding “Short Skirt / Long Jacket” on top himself. It was both a blast to see live and a fun way for the band to acknowledge that, yeah, these songs may sound like other pop songs you know. It’s definitely easy to imagine the group doing a similar thing with “Next to Me (Yo Guy Version),” as there is a deep well of songs to draw from with those chord changes.

Album closer “Vegan Water” again finds Cheekface expanding their sound with some space-age synths floating over the funky bassline and lyrics like “the thing you hate the most? Well, I think it is completely anodyne / don’t smash your fingers closing the window of opportunity / the periodic table of reality / the periodic table of haircuts / ain’t too proud to just vibe / baby you can slash my tires.” The group takes the song and album out with about a minute of Katz and Tannen repeating “I can do no wrong” in a round, which although likely a joke, seems like the case on Too Much to Ask.

It’s not hard to imagine a less clever group of musicians making music like Cheekface and ending up sounding gimmicky or too much like a band who’s more focused on making jokes than they are interesting and engaging music. What keeps Cheekface from falling into that trap is that the joke isn’t that the band is good at writing witty lyrics—it’s more that the idea of making music or art while the world that seems to be crumbling more and more by the minute is kind of an absurd endeavor (let alone blogging about someone else’s music. Jesus). But, it’s also cathartic and a lot more fun than moping about things, and Cheekface’s music is nothing if not fun and cathartic. You can’t be pissed off about the state of the world all the time. You gotta find some joy. Everything is fine.