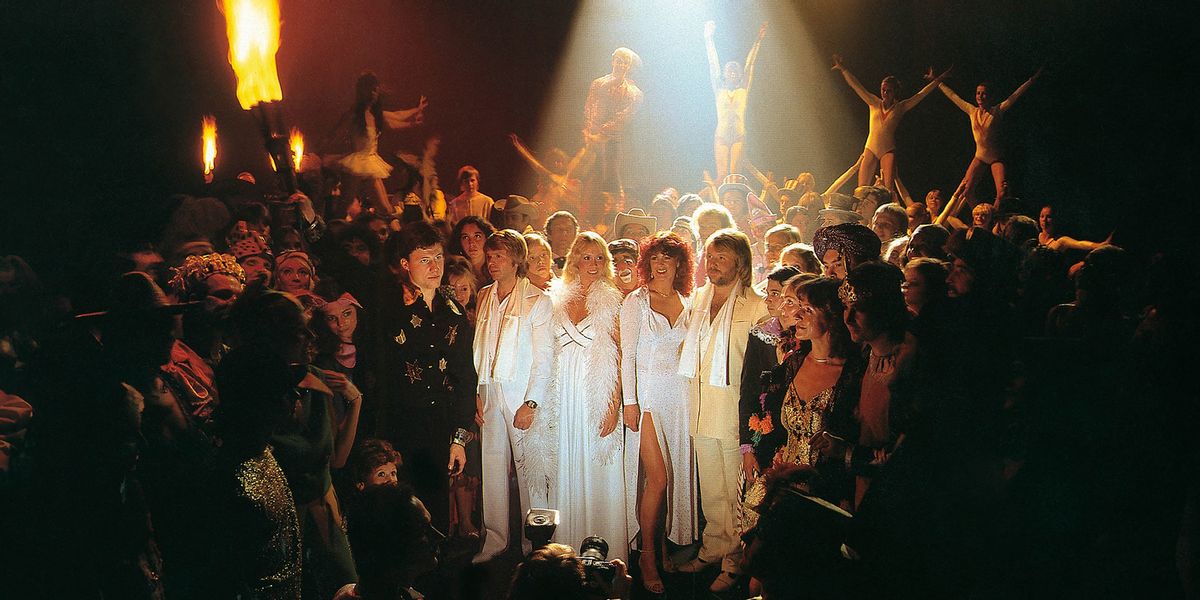 Just what was the secret sauce that made the string of ABBA albums, from Arrival (1976) through to The Visitors (1981), so uniquely satisfying? Even the less consistent earlier albums, particularly 1975’s Abba, bore signs of brilliance. I can only think it was three obvious factors combined. First, there was the subtle alchemy of two rather different singers. Agnetha Fältskog had a fresh, dewy voice that excelled at conveying bruised nobility and anguish. Frida Lyngstad sounded more worldly-wise, sultry, and knowing. When their voices merged, the effect was akin to an invisible third singer with a twinkling, metallic gleam.

Second was the commitment to excellence of the principal songwriter-musicians Björn Ulvaeus and Benny Andersson. They navigated their way beyond soupy schlager music and parochial influences with each album, charting a successful course towards pop perfection. Third – exceptional musicians, engineers, and studios. Of course, there are matters like branding and promotion (the mirror-effect logo they used from 1976 onwards – ᗅᗺᗷᗅ – was a stroke of marketing genius as inspired as the Rolling Stones’ suggestive lips graphic).

In pop, many songs that hook us from the first play are, conversely, the ones that relinquish their hold the quickest. We begin to tire of their obviousness. ABBA’s were different. Yes, one listen was all it took to be captured, but the songs didn’t curdle the more you heard them. I should know. I was part of the last generation to live through the group’s active years. I only caught on towards the end, in 1980, the year of Super Trouper. I was six and learning to harness pester-power to persuade my parents to buy records. ABBA’s genial, unthreatening attractiveness meant that I quickly installed them as surrogate mothers and fathers. I drowned myself in the music. It left me drunk with innocent, pre-teen rapture. I drew pictures of them. I made bad tape versions of the albums with which to bombard my parents in the car. I converted my grandmother, a church organist whose interest in popular music extended no further than a couple of Beatles songs and Joan Baez. I wondered what it would be like to be Swedish. Better, surely.

So fully rehabilitated have ABBA been over the last two decades that many people might not realize how fully out of favor they were after The Visitors. I was pilloried for being ‘square’ as I clung to my ABBA tapes at school through 1983 and 1984. On reflection, anyone using the term ‘square’ in the mid-1980s must surely have been squarer than me. Although I began to shy away from expressing it, I was filled with zeal – why couldn’t these people hear what I was hearing? I never buckled or feigned to dislike them. My reward, eventually, was total vindication: As the 1990s got underway, the ABBA-haters became lovers, often pretending that they’d admired the group all along. In the UK, this process was assisted by Erasure’s popular 1992 ABBA-esque EP and the well-timed, expertly promoted ABBA Gold compilation and its sequel.

Unfortunately, critical rehabilitation is a mixed blessing. I’m never convinced that ABBA’s work is satisfactorily represented by Mamma Mia – or by fun trifles like the Cher tribute album. It becomes hen/bachelor-party ear candy; camp, disposable, wedding-venue froth. Of course, frivolity and a kind of unknowing camp were part of the ABBA mix, but they were so much more than that. Still, it’s a small price to pay to see the group acknowledged as the creative titans they surely were, especially after the ten-year exile from critical favor they endured in the 1980s.

So, where exactly were ABBA in 1980? Not that anyone would have known it, but they were in the final year of their commercial ascension. One year later, The Visitors proved that while their artistic growth was ongoing, their commercial decline had begun. Singles released in 1982 (“Under Attack”, “The Day Before You Came”) registered far lower chart positions than those to which the group had become accustomed, especially in their key markets. 1980, on the other hand, was a banner year for ABBA, with two UK #1 singles and a US #8.

Super Trouper, their seventh album, arrived towards the end of the year with a sleeve that captured them in white-and-cream fripperies, standing in the glare of a large spot-light, surrounded by circus performers. Looking at the accompanying picture-sleeve singles, it wasn’t their finest moment in style terms. The discotheque ice-tones of the Voulez-Vous cover, and the “Summer Night City” video, had almost made them look hip. The Super Trouper-era singles heralded a retreat back to Day-Glo knitwear, fussy flamenco outfits, tight perms, and eye-straining, children’s TV presenter daywear. Some of these photo-sessions have been used for the album’s new inner sleeves (the original inner sleeve, featuring the lyrics against a maroon background, has been moved to the interior panels of the gatefold).

The music was a different story. ABBA were at an exquisite apex. Their lyrics bore witty and heart-rending turns of phrase that might have sounded guileful and over-baked coming from native English-speakers. Every track contained an abundance of celestial harmonies and devastating solo vocals. Underneath was a warm, rich, intricately textured blend of synthesizers and traditional instruments.

ABBA understood that the creative process is dynamic – everything influences everything. The received wisdom – that their sound was formed from schlager and other European influences – ignores how the group wore American inspiration quite conspicuously from the start. Their early hits, like “Ring Ring”, were in the great tradition of the American conveyor-belt pop of 1960s New York. On Super Trouper, it’s “On and on and On”, with its chugging, bar-band sensibility and mildly hedonistic lyric, that is probably the most American moment. It’s not surprising it was chosen as a US single, despite remaining an album track in most other territories.

Another prevalent dismissal of the group contends that they were ‘bubblegum’ – something to file alongside The Partridge Family, Boney M, and the Bay City Rollers. That is partly down to how Andersson and Ulvaeus, grappling with a second language, tended to cleave to perfect rhyme at all costs (“money/honey/funny”), presumably because they cared about craft and were learning as they went along. And it’s partly down to the gently-accented English and gauche apparel of their early years. But to believe that ABBA never transcended bubblegum, you’d have to ignore about 90 percent of their work, which had a far higher purpose.

Take, for example, the delicate art of the divorce song. ABBA had a peculiar flair for it, no matter the angle from which they approached this knotty subject of conflict and unresolved pain. On Abba (1975), they looked at it from the viewpoint of an outsider talking with rather brash concern to a divorced single mother (“Hey Hey Helen”). With “Knowing Me, Knowing You”, one year later, they were tackling it in the first person, with the narrator surveying an empty house that also served as a metaphor for her newly-evacuated marriage.

But it was, of course, on Super Trouper‘s “The Winner Takes It All” that the group perfected this curious sub-genre. It comprises just two melodic phrases. Thanks to the arrangement and production, a trick-of-the-ear is achieved, making the song seem elaborate and operatic. Perhaps it was the group’s most convincing divorce song because it came with the added poignancy of being rooted in experience. The Fältskog-Ulvaeus union had splintered during the creation of Voulez-Vous, the Andersson-Lyngstad marriage unraveling a year later. “The Winner Takes It All” is a dignified heartbreak set to music. The way ABBA put together couplets (“Nothing more to say / No more ace to play”) has a slightly odd, formal quality that betrays the writers’ overseas roots but somehow just serves to make it all the more touching.

Then there’s the iridescent title track, the final song assembled for the LP. The faintly silly “su-pah-pah, trou-pah-pah” backing vocals may invite mockery, but there’s great storytelling here. In the verse, Frida sounds matter-of-fact and listless as she relays the apparent privations, loneliness, and tedium of super-stardom. But this is all a set-up for a joyful chorus in which she imagines the thrill of stepping away from mass adulation and coming to life in a lovers’ tryst. Then comes that glorious, lilting, operatic bridge (“So I’ll be there / When you arrive / The sight of you will prove to me I’m still alive”), foreshadowing the exceptional melody writing that would be unveiled on the following year’s “I Let The Music Speak”.

Analog synths create an icy cathedral of sound for the unforgettable introduction to “Lay All Your Love on Me”, ABBA’s final disco song. Rarely has openly expressed jealousy, and the demand for exclusivity from a sexual partner sounded so slinky and appealing.

As with all the later ABBA albums, Super Trouper was no ‘singles-plus-filler’ confection. Psychology-disco gem, “Me and I”, and then the lovely diptych of ballads, “Happy New Year”/”Our Last Summer”, are as fine as any of their most popular singles. But by my reckoning, the album is very slightly patchier than Voulez-Vous and The Visitors. It ends with bathos – “The Way Old Friends Do” is a well-crafted ‘let’s all link arms and have a brandy’ anthem in the vein of “Auld Lang Syne”. It doesn’t ring entirely true. It’s like concluding an otherwise brilliant album with a Hammond organ cover of “Greensleeves”. It’s not the only misstep.