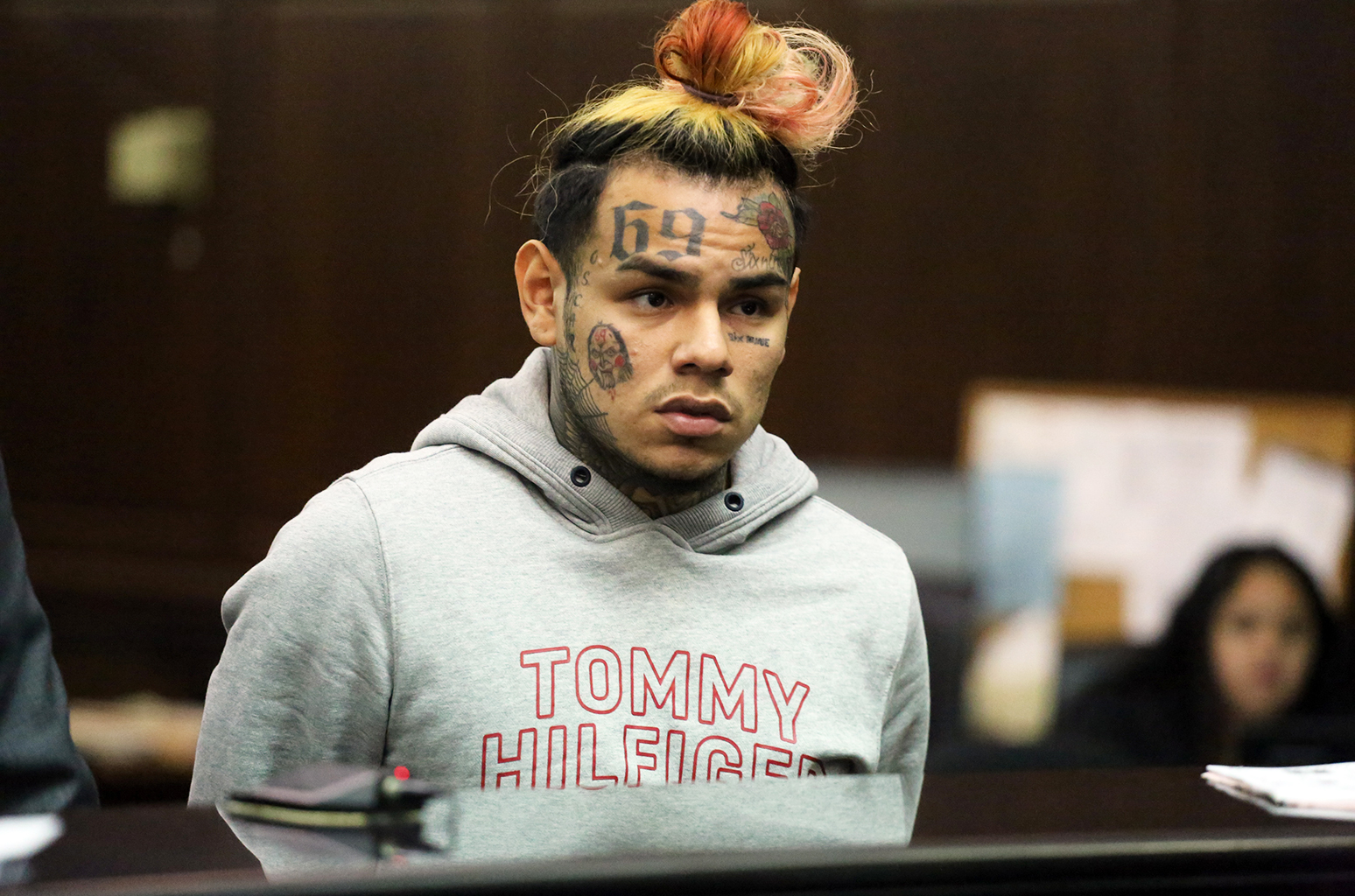 6ix9ine's longstanding legal battle came to a close Wednesday (Dec. 18), as the 23-year-old — born Daniel Hernandez — was sentenced to two years behind bars on a myriad of weapon and racketeering charges related to his involvement with the Nine Trey Gangsta Bloods.

Hernandez is likely to earn time served for the 13 months he's already been behind bars since his November arrest last year. Hernandez should be released at some point in late 2020. Upon regaining his freedom, he will still be under the government's watchful eye for five years of supervised release and be responsible for 300 hours of community service, as well as $35,000 in fines.

Thanks to his cooperation with the federal government, 6ix9ine was given a lenient sentence following his guilty plea on RICO charges in January, which had him staring down a minimum of 37 years in prison. He plans to continue his music career after inking a new deal with 10K Projects and will not enter a witness protection program.

This specific case isn't the only time Tekashi has been entangled with the law. Even before his trash-talking days on social media and boisterous raps, Hernandez's rap sheet dates back to issues in 2015.

On his sentencing day, take a look back at 6ix9ine's legal history.

6ix9ine is arrested by law enforcement after they get their hands on an explicit Instagram video of Tekashi taking part in sexual activity with an underage girl from a party he attended in February 2015. It was later revealed that the woman involved was only 13 years old.

He eventually pleaded guilty to using a child in a sexual performance in October, which is a felony in New York. The "BILLY" rapper was sentenced to 300 hours of community service, abstaining from posting certain social media content, mental health counseling, getting his GED and apologizing to the victim's family in a letter.

Seeking revenge against Rap-A-Lot Records for not allowing 6ix9ine to perform at a venue he was booked for in Texas, Nine Trey took action. Multiple associates of Rap-A-Lot, including CEO J. Prince, were robbed at gunpoint in the lobby of a Times Square office building in NYC. 6ix9ine later testified about the incident in September, admitting the gang's motive for the robbery and stated that his manager, Shotti, was involved and he only filmed the altercation from outside.

In the underground tunnel of Brooklyn's Barclays Center, Nine Trey and members of Casanova's entourage were involved in an altercation before an Adrien Broner fight. Fuguan Lovick, an associate of 6ix9ine, was found to fire off a gunshot during the incident. The week prior, Nine Trey ambushed Casanova and his crew during a music video shoot, where a pair of men were shot and injured.

6ix9ine is officially charged with assault for an argument that turned physical with a teenager at the Galleria Mall in Houston at the top of 2018. Tekashi was upset that the kid was videotaping him while trying to shop. The teen alleged that 6ix9ine choked him around the neck and threatened him to delete the videos. Tekashi was eventually arrested for the incident at JFK Airport in NYC in July of the same year.

After attempting to park his SUV by a fire hydrant in Brooklyn, 6ix9ine is stopped by police and arrested for driving with a suspended license. Once his handcuffs are removed on May 21, he made the mistake of grabbing an officer, which had him slapped with another four misdemeanor assault-related charges. He would plead guilty to disorderly conduct charges in November 2018.

Chief Keef is shot at multiple times in the early morning hours during a drive-by outside the W Hotel in NYC. Luckily, Keef is left unharmed. Come December, 6ix9ine admits to ordering the hit on the Chicago rapper for $20,000 to whoever would end up pulling the trigger, which many pointed to being Kooda B, but he also denied in his testimony.

Just hours after releasing "Fefe" with Nicki Minaj, 6ix9ine is allegedly robbed and kidnapped at gunpoint after shooting a music video in Brooklyn. Tekashi maintains that the incident wasn't a publicity stunt, as his injuries landed him in the hospital. The robbers allegedly took him to his home, where he was forced into forking over approximately $750,000 worth of jewelry and another $20,000 in cash.

After finally closing the book on his 2015 child sex case, 6ix9ine and his associates went to Phillipe Chow to celebrate the legal win with a lavish dinner. Things got ugly when the crew was denied entry into the restaurant, as a brawl took place and gunshots rang off. A pair of 6ix9ine's entourage members and his manager are arrested for their involvement. One of the security guards working at the restaurant is reportedly hit over the head with a chair.

On the set of Tekashi's "MAMA" video shoot with Kanye West and Nicki Minaj, the Beverly Hills mansion the trio rented out is shot up from a moving car outside. All of the crew evacuates and they never ended up finishing production on the video.

Federal agents get wind of 6ix9ine's plans to travel to Foxwoods Casino in Connecticut after canceling his entire U.S. tour. They gobble him up and place him under arrest on numerous RICO charges. His allegiance to Nine Trey then goes public, and he's denied bail along with five other Nine Trey gang members.

After initially pleading not guilty, 6ix9ine strikes a plea deal with the federal government on multiple drug trafficking, racketeering and firearms charges. The 23-year-old had been facing a minimum of 47 years behind bars. A New York Times report confirms Tekashi's cooperation with law enforcement authorities on the case.

Tekashi takes the stand and admits to putting an attack on rap adversary Trippie Redd in motion. 6ix9ine's team found Trippie's video shoot location and followed him back to his hotel, where they attacked the "Dark Knight Dummo" rapper and members of his entourage. Tekashi also made claims of Trippie's ties to the Bloods as well.

Tekashi is sentenced to 24 months in prison at Manhattan federal court by U.S. District Court Judge Paul Engelmayer. Following his cooperation with authorities, his recommended sentence came to be much lower than the charges against him warranted in his plea deal. 6ix9ine should be released before 2020's out, as he's most likely to be credited with time served.