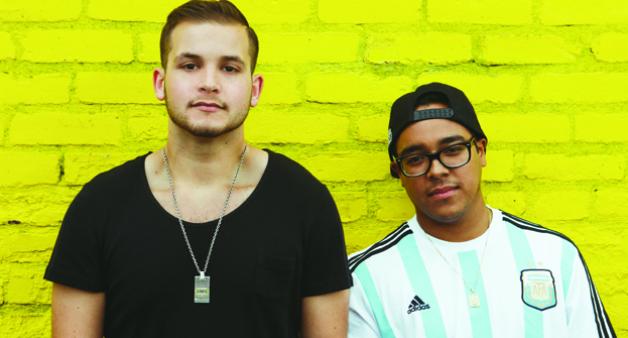 The sonic palettes of Van Toth and JWLS, the producer/DJs behind Miami-based duo GTA, were not always united. Individually, the two have very different sounds but after connecting via SoundCloud and Facebook in 2010, the tech house from Matt Van Toth’s world met the hip-hop that drove productions of his now-partner Julio Mejia (JWLS), gave way to something else entirely.
With their very first collaboration, GTA clinched the opportunity to release on Afrojack’s Wall Recordings. Since then, the duo has grown consistently and have earned acclaim from tastemakers across the scene, resulting in a flurry of releases on labels such as Diplo’s Mad Decent, A-Trak’s Fool’s Gold Records, and Tiësto’s Musical Freedom.
With roots in electronic rock, urban and Latin music, all in equal parts, GTA’s sound is best described by their simple mission statement: “Death to Genres.” Here, the duo shares what tracks have helped form their sound-breaking work.

01. System Of A Down – ‘Chop Suey!’
“When I was first getting into rock this was one of the first songs I had ever heard and it blew my mind. It was so fun and energetic. The combination of how much the drums changed with the guitars and crazy/almost silly vocals is part of the reason why SOAD is one of my favorite bands ever!”

02. Santana – ‘Samba Pa Ti’
“This song makes me tear up a bit! There is so much emotion in it and there aren’t even any words. I would use this song to cheer me up in any way if I’m ever feeling down.”

03. Pink Floyd – ‘Wish You Were Here’
“This song reminds me of my cousin’s father, who bought me my first guitar. He taught me most of what I know about music and a lot of great things about life. May he rest in peace.”
04. Michael Jackson – ‘Rock With You’

“This song as well as almost every other MJ song just always lifts your spirits! No matter where you go or what you’re doing, his songs just go along with it and put a smile on everyone’s face.”

05. Benny Benassi – ‘Satisfaction’
“This song is one of the turning points for me and although I had heard and liked other electronic music songs before ‘Satisfaction’, this one was the one that made me want to really produce electronic music. This song as well as seeing Benny play at Ultra 2008 were some moments where I saw myself pursuing music as a career!”
JWLS:
06. The Mars Volta – ‘Inertiatic ESP’
“When I first started listening to rock music, my cousin showed me a band called The Mars Volta and I freaked out! This song was just filled with crazy fast paced energy and it reminds me when we were driving fast on the highway while listening to it on full blast.”

07. Cortex – ‘Huit Octobre 1971’
“I heard this song through a sample from an MF Doom song and loved the singer’s voice in it! I love jazz and the original song by Cortex is one of my favorite jazz/funk fusion songs ever!”

08. Stereolab – ‘Flower Called Nowhere’
“The first time I heard this song was in a video of Pharrell [Williams] talking about a band called Stereolab. I got the whole album and it was so amazing. The chord changes and vocal melodies are beautiful in this song!”

09. N.E.R.D – ‘Laugh About It’
“I LOVE N.E.R.D!! One of my favorite bands ever, next to System Of A Down. I saw them play this in Miami while they were touring off their album — and one of my favorites from them — ‘Seeing Sounds’.”

10. Kendrick Lamar – ‘Alright’
“Pharrell produced this beat and this is definitely one of my favorite songs off Kendrick’s album, ‘To Pimp A Butterfly’. I really want to make a song with this much bounce one day!”
Words: ALICIA HORN Pics: JASMINE SAFAEIAN